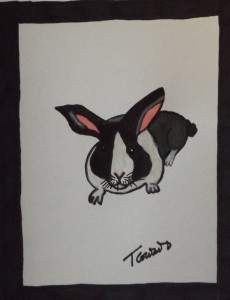 My attempt at a pet portrait, my son’s new rabbit! ha-ha!

Filed under My art

To hold pure love you must hold a dog
A dog will love you more than you can ever know
Unconditionally, its life with you will flow
A friendship on tap
A blanket of warmth
A dog is there for you
The love, it will swarm
Show respect to your dog
And treat your dog well
It will help you through bad times, when things are just Hell
It will comfort you and keep your toes warm
Love your dog, it’s allegiance to you is sworn!

Filed under My life

Filed under My inspirations, My life

More subjects in the blog

Time to expand this blog a bit; there will be new categories and tabs for you to choose from within the next few days, they will include;

A page about my experiences with Cosmic Ordering

Art, my own, my friends, and those that inspire me

My pet’s page, where I will update about the lives of my many pets as sometimes they inspire me

Health update as I am often sick

Daily Pages dedicated to the work of Julia Cameron, the author of the artist way

Food and places to eat reviews

And last but not least, recipes

Filed under About my work, My inspirations

Musings and books from a grunty overthinker

Listen to your inner self..it has all the answers..

True wealth is the wealth of the soul

living in verses
Glimpse of the Psyche
BY THE LEFT HAND...

Throwing my soul into the cosmos.

The Chronicles Of Agartha

The fate of two worlds is decided by a few

The poetry of ineptitude.

But poetry, beauty, romance, love, these are what we stay alive for

I'm on a life changing journey to 40. There will be ups, there will be downs. I'm like a roller coaster but with more agoraphobia.